Find real-time data by selecting a Station below or the ​​​​​Live Map tab.

Caltrain parking stall #s 115-131 will be impacted from tomorrow 1/31/23 – 2/5/23. Passengers must plan for additional time for parking and walking as the closest stalls to Burlingame Station will be taken to facilitate the emergency tree work.

This year has been an eventful one for Caltrain. With significant strides made in the electrification of our railroad as well as the many other major projects, the progress made in 2022 is sure to benefit our riders for years to come. This page is a brief summary of all we have accomplished this year.

On September 24 this year, Caltrain representatives were joined by dozens of federal, state, regional and local officials and community members to celebrate the first public viewing of the agency’s new electric train cars.

The new vehicles will serve as the centerpiece of the transformative Caltrain Electrification Project.

The electrification of the Caltrain system will deliver major benefits to the communities that it serves. Electrification will reduce Caltrain’s greenhouse gas emissions and eliminate the particulate matter caused by the aging diesel engines. Engine noise created by the trains will also be reduced.

Service will become both more frequent and more comfortable, as state-of-the-art electric trains replace the 30-year-old diesel fleet. Caltrain electrification has also created thousands of jobs locally and throughout the country, both to electrify the corridor and to assemble the new trains. The infrastructure that is being installed will be compatible with future high-speed rail on the corridor.

These trains will go into service in 2024, and until then will be tested to ensure they and the infrastructure they will rely upon, are in good working order.

All five partner agencies involved in the management of Caltrain approved a new Memorandum of Understanding (MOU) to establish a permanent, separate Executive Director position for the agency, as well as five Caltrain-specific direct reports, while the San Mateo County Transit District (District) will be repaid for its initial investment in Caltrain.

Bouchard has spent over 25 years in the transit industry, rising through the Caltrain ranks during the 2000s to eventually become Director of Rail Transportation, where she successfully managed all aspects of the procurement and transition of operations, maintenance and management services. In 2015, after a brief time at the Bay Area Rapid Transit District, Bouchard returned to Caltrain as Chief Operating Officer. Upon taking on the Acting Executive Director role, she has been overseeing the Electrification project, which will modernize Caltrain service starting in 2024. In 2018, she was recognized as one of Railway Journal’s Women in Rail, in recognition of her transportation experience, leadership skills, industry contributions, and involvement in community service. 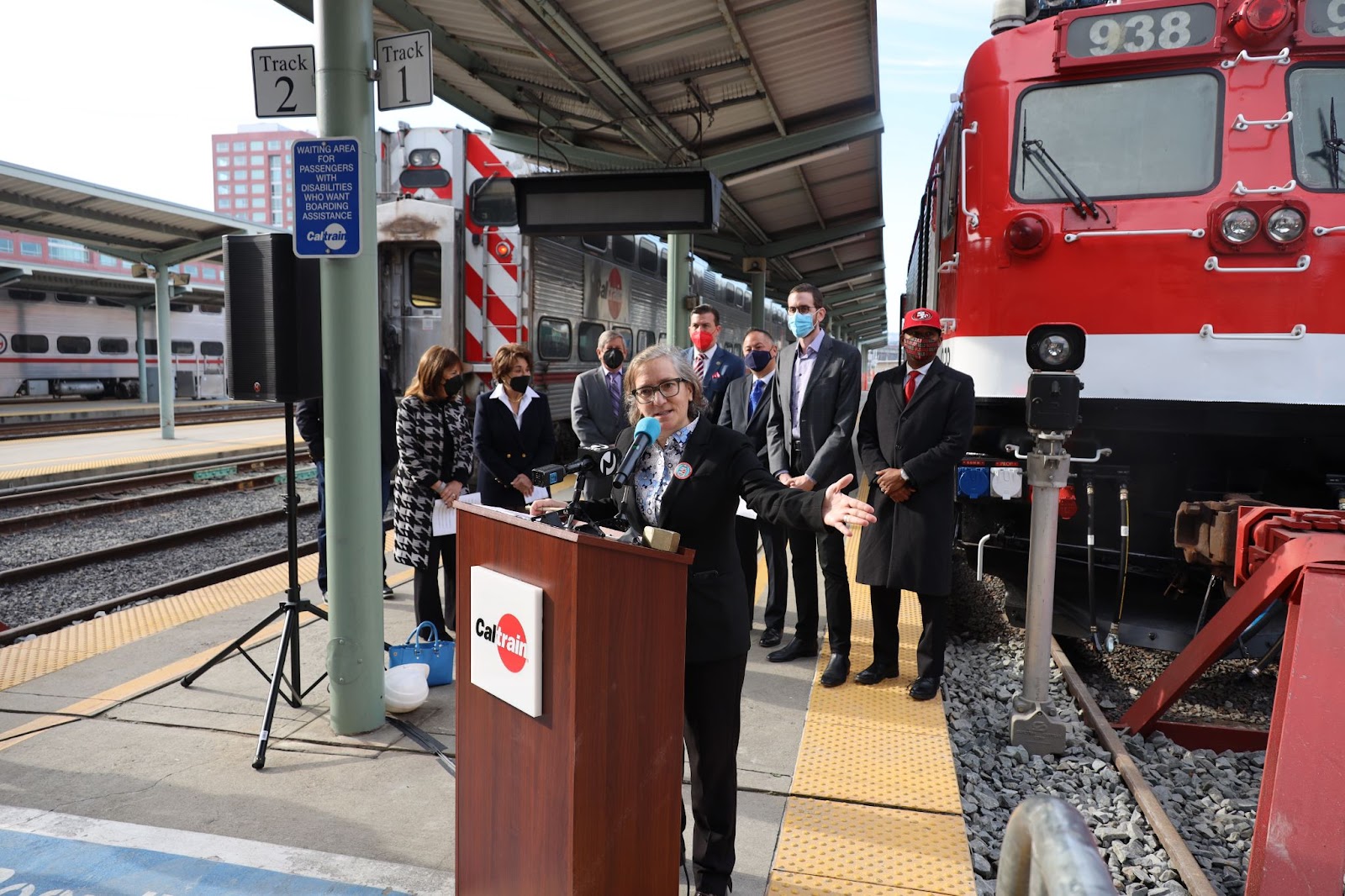 South San Francisco received a brand new station in 2022, thanks to the efforts of Caltrain, the City of South San Francisco, the San Mateo County Transportation Authority and the Federal Transit Administration.

The $96.6 million project built a fully accessible station with a center-boarding platform, allowing riders to seamlessly move between platforms. The modernized station provides updated amenities, improves Caltrain efficiency, and lays the foundation for Caltrain electrification that will run faster, cleaner, and quieter service. A new pedestrian and bicycle underpass enhances east-west connection; while the overall design integrates the station into the fabric of Downtown South San Francisco to better serve the community.

Caltrain began construction work on the Bayshore Station Overpass Rehabilitation Project, which will remove and replace the coating on the station’s pedestrian bridge and stairwells. This will ensure the overpass remains safe and fully functional for years to come.

The work resulted in partial closure of platforms that affect how riders board and disembark from the train. Half of the bridge will be under construction at a time to allow riders to pass through with minimal impacts. The project is expected to be completed in February 2023.

In addition, Caltrain worked closely with the City of Redwood City as it approved a future downtown Transit District that will include redevelopment of Sequoia Station, a grade separation and new elevated Redwood City Caltrain Station.

In September, Caltrain began running a new weekday schedule reducing wait times for passengers connecting with BART in the evenings, while increasing service to the South San Francisco and 22nd Street stations.

BART and Caltrain evening connections were improved so riders will only have to wait between 9-16 minutes at the Millbrae Transit Center. The new schedule also increases peak and evening service at the South San Francisco and 22nd Street Stations. 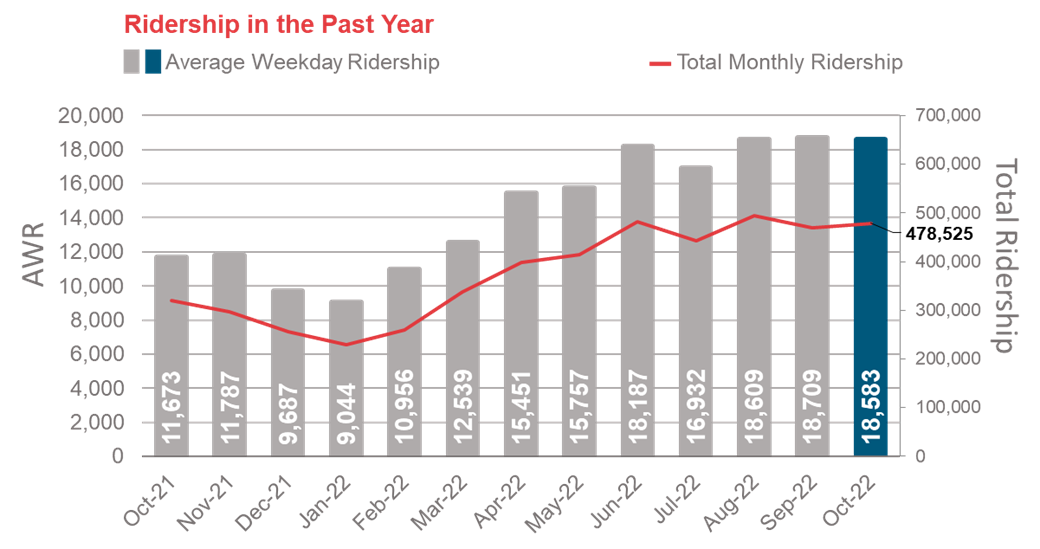 The Caltrain Board of Directors voted to postpone planned fare increases to encourage more riders to return to the system.

Caltrain’s original Board decision to raise the price of certain Clipper fare products was made in September 2019. In addition, there were two 5% increases in the cost of a Go Pass that were scheduled for January 1, 2023 and January 1, 2025, both of which were delayed by a year. As a result, all Caltrain fares, including the existing Clipper Adult fare discounts and Adult Monthly Pass pricing will not change.

The Go Pass Donation Program began in 2021 to diversify Caltrain’s ridership and increase access to the system. The program allows Go Pass subscribers to donate unused passes to a network of qualified community-serving organizations. The program seeks to help traditionally under-represented groups, such as equity priority communities and essential workers bypass barriers to using the Caltrain system. The free passes reduce beneficiaries’ travel costs and improve mobility and connectivity for participants.

The Go Pass Donation Program served nearly 300 recipients in 2022 providing 650 rides per week, with nearly half of recipients being new to the system.

The Caltrain Board has fully adopted the program, so people will benefit from the donated Go Passes for years to come.

Holiday Train Delights Friends and Families of All Ages

On December 3rd and 4th, the Holiday Train returned to bring good tidings and cheer to families from San Francisco to the South Bay as part of its annual toy drive.

The Holiday Train, decorated with more than 75,000 glittering lights, visited nine Caltrain stations in San Francisco, San Mateo and Santa Clara counties over that weekend, putting on a live show for crowds of thousands throughout the corridor.

This cherished tradition offered an opportunity to donate new toys or books to local children whose families are struggling to make ends meet. Caltrain was proud to once again partner with the U.S. Marine Corps Reserve Toys for Tots program and The Salvation Army to help make the season brighter for everyone.

The URL of this page automatically updates to allow you to share your map center, zoom, and other state. Click the URL below to copy a link to this page without any of this information, which may be personally identifying.
https://www.caltrain.com/2022-year-review
All contents © 2023 San Mateo County Transit District. All rights reserved. Map data © OpenStreetMap contributors.